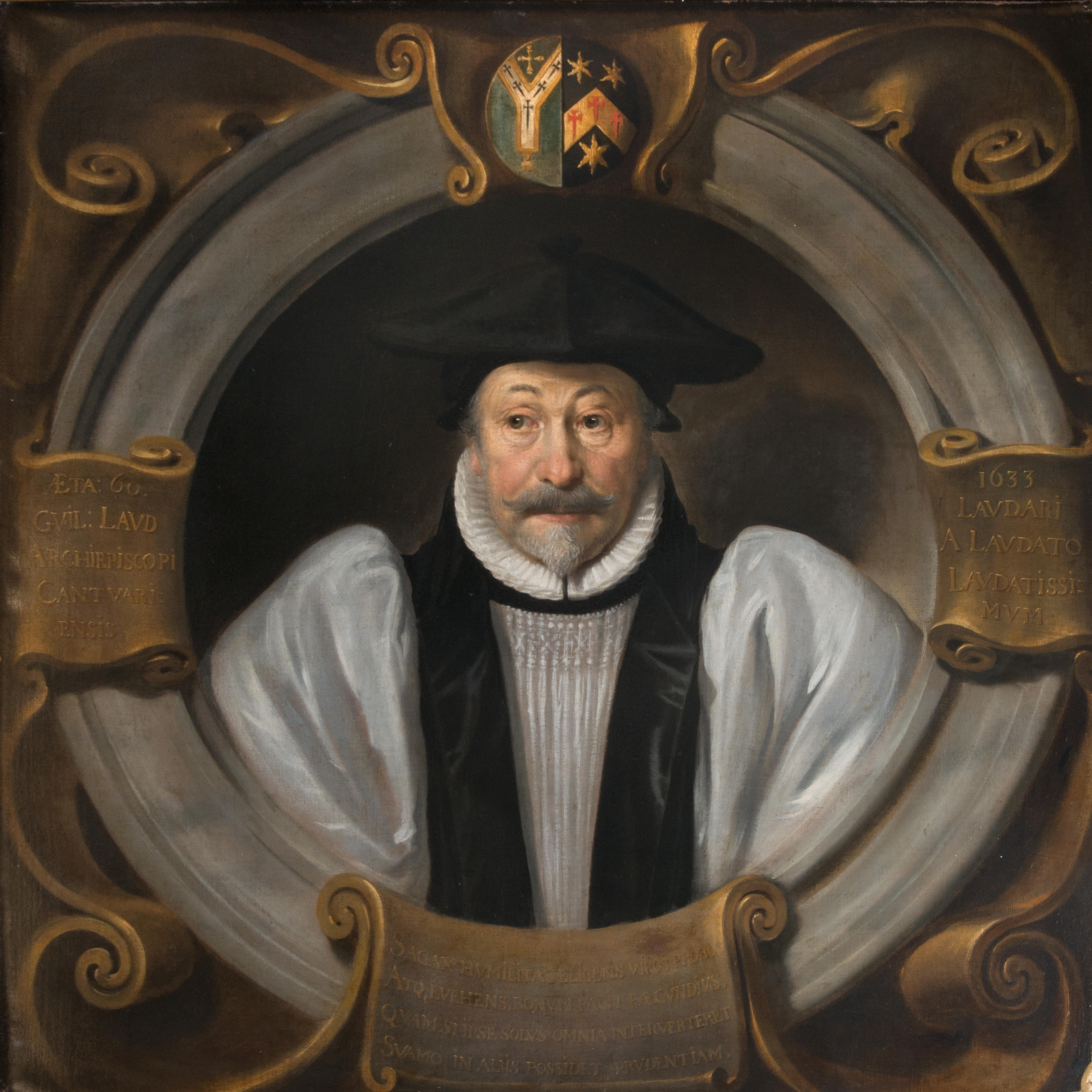 The Latin inscriptions either side of the figure commemorate Laud’s appointment as Archbishop of Canterbury at the age of sixty in 1633, along with a playful pun on his surname and a maxim cited by Cicero: Laudari A Laudato [viro] (to be praised by a man of praise).3 The lower inscription is more unusual: it is a contracted version of the Latin poem ‘Bonus Civis’ (‘The Good Citizen’) by the Anglican clergyman and poet George Herbert (1593–1633), which can be translated as:

And making prominent the good

Man, makes that good one richer

Than if he alone

Were appropriating everything. She shows

Her prudence through another’s acts.4

The unusual iconography and inscriptions indicate that the artist was accommodating the demands of a patron who was Anglican and most probably Royalist. The commemorative nature of the portrait suggests the work was made after Laud’s death in 1645, most likely after the Restoration of Charles II in 1660, when the reputations of Laud and other prominent Anglicans and Royalists were salvaged.5

The setting of the portrait within a faux architectural relief with heraldry and inscription similar to that of a sculpted tomb monument gives the portrait a monumental presence and commemorative air. It is possible that the painting was intended to fit a particular architectural setting, possibly as part of a set of bishops or Royalist martyrs. It is perhaps more likely that the bust-in-roundel format derived from a print after the famous Van Dyck portrait; this would also explain the reversed light-source. The portrait most closely corresponds to a print after Van Dyck by Wenceslaus Hollar (1607–1677) of 1641 (fig. 2). It also bears similarities to later prints by David Loggan (fig. 3) and Robert White (fig. 4),6 whose dating has not been secured and could have been produced from c.1663 right up to the end of the seventeenth century.7

The picture has rarely been exhibited, and little is known of its provenance. It was recorded in the collection at Bignor Park, West Sussex, in 1832 shortly after the property had been rebuilt by John Hawkins (1760–1840).8 It was subsequently exhibited in London in June 1846 as the property of J. H. Hawkins,9 presumably John Hawkins’s son, John Heywood Hawkins (1802–1877), who inherited Bignor Park on his father’s death in 1841.10 The picture has since passed through the family from Bignor Park to Trewithen, probably around the time of Viscount Mersey’s purchase of Bignor Park in 1926, as the first record of the portrait being at Trewithen is an inventory of 1928.11

For a more detailed study of this portrait, see Emily Burns, ‘Laudari A Laudato Laudatissimum: Trewithen’s Portrait of William Laud’ in this project.