West Wycombe holds an unusual position among British eighteenth-century country houses in terms of its collections, architecture and decoration. Transformed by one man over four decades, the house displays an extraordinary diversity of classical styles and influences that embraces the works of art, the interiors and the facades (fig. 1 and fig.2). As a whole, it epitomises the experimental and eclectic tendency in the national aesthetic of the mid-century, presenting a complex visual and conceptual palimpsest. The present case study explores these complexities and contradictions, while suggesting that the personality of Sir Francis Dashwood (1708–1781) – ambitious in taste, culture, politics and society – lies at the heart of the house and its collections.1 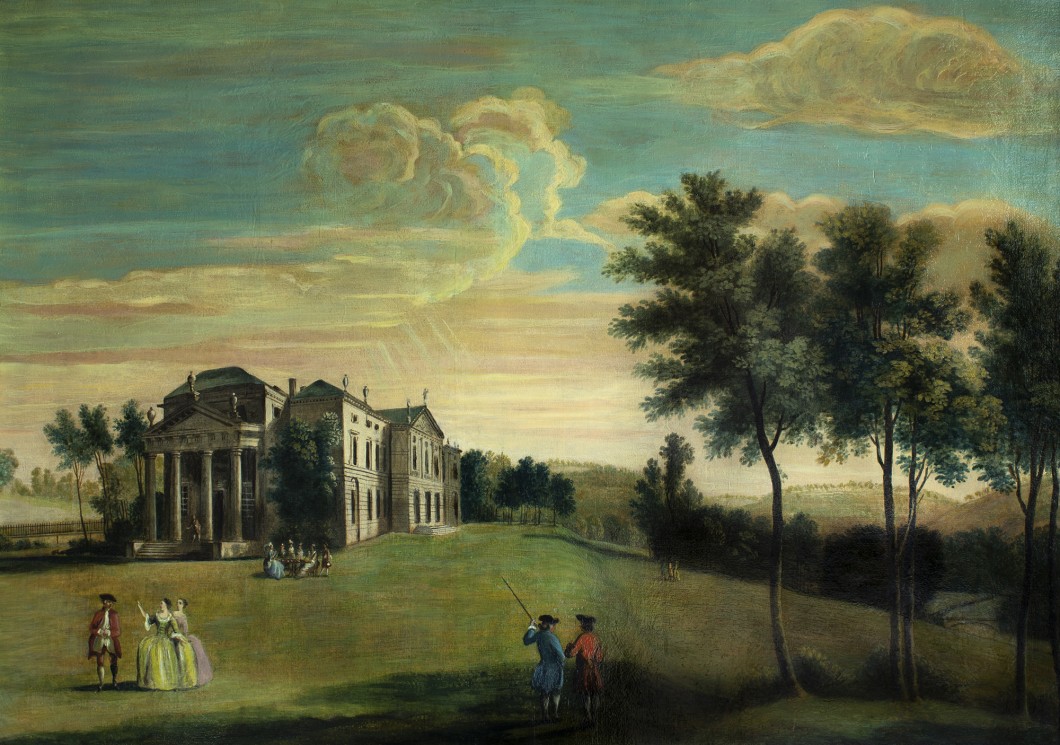 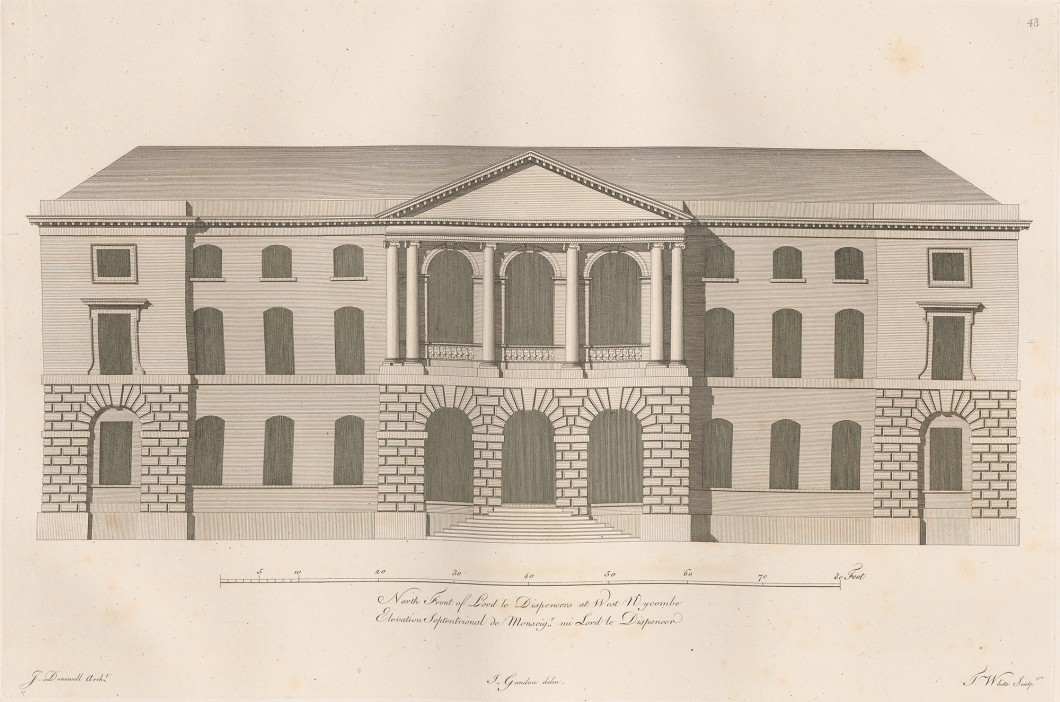 Many of the country houses of the British Isles were built in campaigns extending across generations, revealing distinct stylistic shifts and containing collections that are dynastic in character; often the house is but one of a portfolio of significant properties – a good example being that of Northumberland House (London), Stanwick Hall (Yorkshire), Syon House (Middlesex) and Alnwick Castle (Northumberland), owned by the Dukes of Northumberland. By contrast, West Wycombe and its collections are intimately interconnected with its eighteenth-century creator. The house, its estate and the village of the same name lie to the west of London at the edge of the Chiltern Hills, about 40 miles from the capital. Close to London, it was easily accessible and as such it took on a life beyond that of country retreat; it can also be read as an outpost of the group of suburban villas dotted in the countryside to the west of the capital, notably Chiswick, Syon, Osterley and Cliveden. In addition, its owner’s proximity to the circles of Frederick Prince of Wales (1707–1751) and, later, the Whig powerhouse of Stowe, enabled it to function as a locus of political intrigue and networking.

The fact that political interactions (documented in accounts such as the diary of George Bubb Dodington, Dashwood’s vastly wealthy friend) took place in a house that is decorated with motifs stressing Bacchic conviviality and Venusian sensuousness is no contradiction when seen in the light of Dashwood’s character, formed by his classical education, family ties and his foreign travels. The impact of these experiences was profound and endured through the various circumstances of his career; we see just how integrated was his public life with the seria ludo of the gentlemen’s and travellers’ clubs of which he was a leading light.

The challenge taken up in this study – to offer an integrated account of the house, its design and its collections – is driven by the closest possible examination of the evidence it provides, both artistic and textual, evidence that reveals the aesthetic motivations of Sir Francis Dashwood and the major influences in the development of his taste. Those can be summarised as firstly, his uncle John Fane, 7th Earl of Westmorland, secondly, his tours abroad and finally the diverse array of artistic and architectural practitioners he employed to carry out his ideas. This focused reading of the sources at the house has been revelatory and has facilitated a reassessment of the way it has been perceived in previous accounts.

The case study acknowledges the great debt owed to the scholarship of the late Giles Worsley and Gervase Jackson-Stops who in many accounts, several published in Country Life, did groundbreaking work in the identification of the sources of the architectural and decorative designs. Tim Knox’s articles on the house have continued this tradition of excellence, in particular his 2004 essay on the sculpture collection. The unpublished doctoral dissertation of Steven Parissien on the Palladian architect Roger Morris has been of key importance and the work done by Anne Purchas, also unpublished, in her overview of the building history and architectural drawings, helped to create a base from which the examination of the architectural refurbishment of the house has been made.

Each of the sections in this study emphasises the role of the collections at West Wycombe and what they reveal about the house. A thorough examination of the catalogues and book lists kept in the Bodleian archives of the family, combined with access to the library as it still exists in the house, has led to conclusions about the extent to which Francis Dashwood – an inveterate bibliophile – relied on his library of books on architecture and design to furnish him with exemplars for his decorative schemes. In this sense, West Wycombe’s interiors are a physical extension of the innumerable prints collected by Sir Francis or provided by his team of decorators. These constituted an easily accessible repertoire of forms and meanings, as well as a cultural code shared by the learned guests of the house. The end result is a series of decorative cycles within the house and on its facades that play with canonical images and established iconographies to create something unique, in tune with Dashwood’s independent spirit. 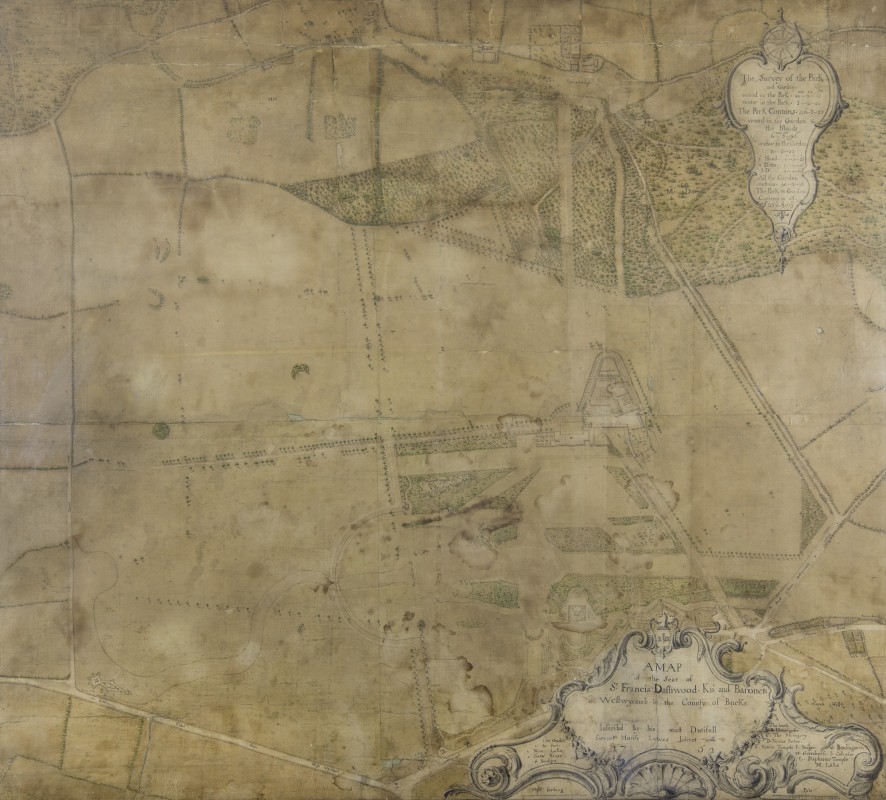 The large collection of architectural and other drawings – about 190 – which are preserved in drawings cabinets or framed and hung in the Study and on the first floor of the house has provided some exciting surprises in the search for evidence of Dashwood’s influences and taste. When compiling a select catalogue it is necessary to make a choice; the attention here is on creating a narrative for the building of the facades and beyond that, to look at drawings that have particular relevance to the owner’s tastes and connections. Drawings for work undertaken on the estate, including the mausoleum, parish church and the fascinating collection of garden buildings in the park (fig. 3) – revelatory of Dashwood’s predilection for bawdy humour through classical reference – are briefly discussed in the biographical essay. 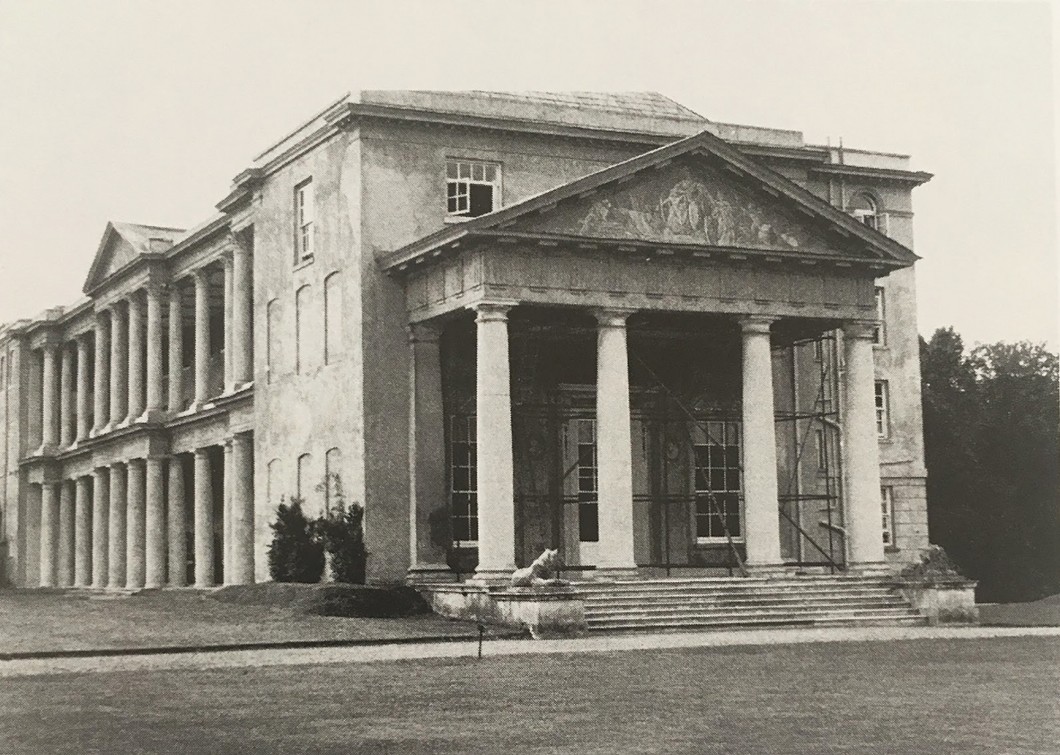 One aspect that the study of the architectural drawings has highlighted is the central role of Dashwood himself as a designer – and, in a few cases, amateur draughtsman – particularly of the north front, the first to be built. The influence of Fane and his Palladian villa at Mereworth in Kent was paramount when it came to the east portico, while strands of continental classical influence came into play – via Dashwood’s friend Dodington – for the highly innovative double colonnade of the south front. Finally, with the Greek west portico, designed by the protégé of the Society of Dilettanti Nicholas Revett, Dashwood’s educated taste reaches its clearest statement (figs. 4 - 6). 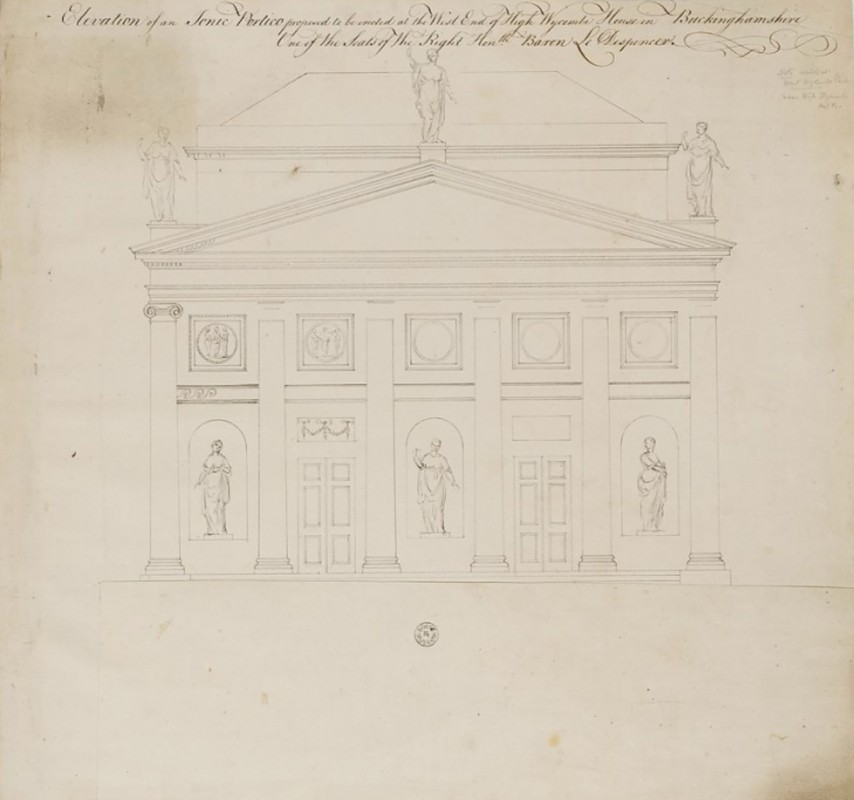 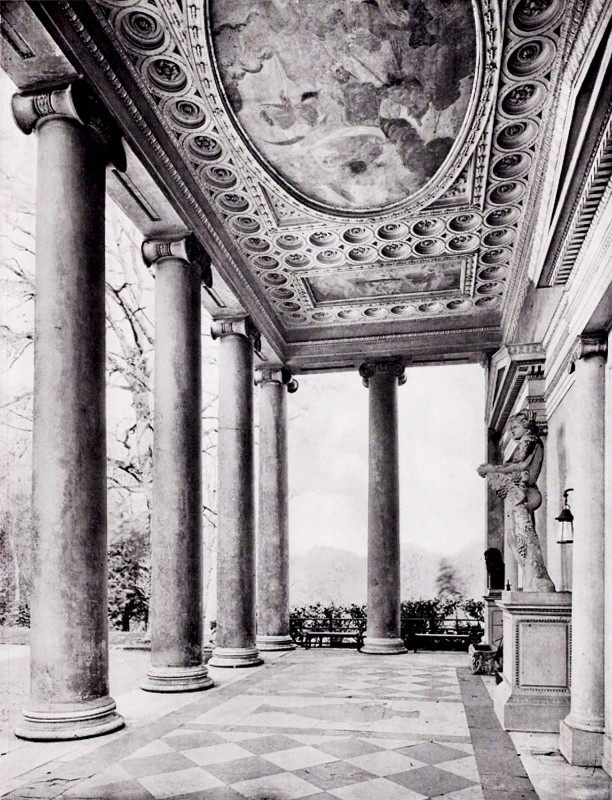 The paintings and sculpture in the house are not in any way standard purchases of the Grand Tour era. Examining the collection as it stands – alongside the evidence of works now elsewhere – enabled an enhanced understanding of how the collection was formed and what were the choices made in respect of its display. The movable art at the house can be read as a third level of display; the architecture and the architectural drawings, the interior decoration, inextricably linked to its sources in the library, provide the physical context for the placing of the works of art. All three layers need to be considered together in an integrated approach before any assessment can be made of Dashwood’s patronage and taste.

In his assessment of West Wycombe, Giles Worsley articulated the dilemma of scholars examining this house, summing it up as a ‘series of perfect neo-Classical reconstructions, but lacking a basic framework to make it seem the recreation of an Antique house that it was meant to be.’2 But turning the argument around has helped the present study: rather than imputing to Dashwood the ambition to ‘recreate’ an antique house (as did Lord Burlington at Chiswick), one can view his achievements in a different light. As a case study of architecture, interior design and collecting, West Wycombe presents a laboratory for eighteenth-century neo-classicism.

It is hoped that this study can provide a platform for future scholarship, enabling others to engage with some of the aspects raised by the research questions explored here. Leaving aside the areas within the estate that are not discussed here, many of the assessments remain open issues; the wealth of the sources and the richness of the collection will no doubt continue to attract the attention of scholars.

Finally, the authors wish to acknowledge the generosity and the warmth of the welcome provided by Sir Edward and Lady Dashwood during many research and photography visits to West Wycombe. It would have been impossible to complete the case study without the support they have offered, and sincerest thanks are due to them.